Born in Stamford, Connecticut, Allan Schindler pursued his undergraduate education at Oberlin College (B.M. in Music Composition, B.A. in English), and his master's and doctoral studies in composition and musicology at the University of Chicago, where he with Ralph Shapey and Richard Wernick. Before coming to Eastman in 1978, he taught for a year at Ball State University and for seven years in the theory/composition department at Boston University, where he also ran the electronic music program.

Schindler's musical compositions, including purely acoustic works, works that feature or employ computer music resources, and multimedia compositions that include video/film or dance, been performed by leading soloists and ensembles throughout North America and Europe, as well as in Asia, South America, Australia and New Zealand. Currently his music is available on Innova, Centaur, CDCM, New Albany and Capstone compact disc releases, and in score publications by semar editore and Keyboard Percussion Publications.

Schindler is a founder and co-director of the yearly ImageMovementSound Festival, which sponsors the creation and presentation of innovative collaborative works incorporating music, film and dance. His own film/musical compositions, collaboratively realized with Stephanie Maxwell and other artists, have been performed internationally on hundreds of film and multimedia festivals and concerts, and he has lectured extensively on this aspect of his oeuvre.

In 1983 Schindler served as director of the International Computer Music Association Conference, and more recently has served on the governing, editorial and selection committees of numerous computer music, new music and composition awards organizations and competitions. In addition to his compositional work Schindler has served as the Consulting Editor for Music at McGraw-Hill, Alfred A. Knopf/Random House and Holt, Rinehart, Winston, and as an editorial consultant for Grolier Inc., the Longman Group and other publishers. His own publications include six articles in the Academic American Encylcopedia, a music appreciation text entitled Listening to Music; general editorship of the Proceedings of the 1983 International Computer Music Conference and ancillary publications; and various essays and reviews in professional journals and festival publications. 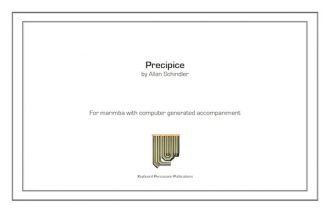