Dr. McBeth, born in 1933, Professor of Music and resident Composer and Chairman of the Theory-Composition Department at Ouachita University in Arkadelphia, Arkansas. He held this position from 1957 until retirement in 1996. Upon his retirement he was appointed Trustee's Distinguished University Professor. He was conductor of the Arkansas Symphony Orchestra in Little Rock for many years until his retirement in 1973, whereupon he was elected Conductor Emeritus.

The most outstanding of his awards have been the Presley Award for outstanding bandsman at Hardin-Simmons University in 1954, the Howard Hanson Prize at the Eastman School of Music for his Third Symphony in 1963, recipient of an ASCAP Special Award each consecutive year from 1965 to present, the American School Band Directors Association's Edwin Franko Goldman Award in 1983, elected Fellow of the American Wind and Percussion Artists by the National Band Association in 1984, Phi Mu Alpha Sinfonia's American Man of Music in 1988, Kappa Kappa Psi's National Service to Music Award in 1989, Mid-West International Band and Orchestra Clinic's Medal of Honor in 1993, John Phillip Sousa Foundation's Sudler Medal of Honor in 1999 and Past President of the American Bandmasters' Association. In 1975, McBeth was appointed Composer Laureate of the State of Arkansas by the Governor.

McBeth's formal training was received at Hardin-Simmons University, University of Texas and the Eastman School of Music. He is a member of the American Bandmasters Association, Past President, American Bandmasters Association, 1993-94, National Band Association, Phi Beta Mu, Kappa Kapps Psi, Phi Mu Alpha, Tri-M Honarary Music Society of Composers, Authors and Publishers. His publications include works for all media, choral chamber, orchestral and band. His intense interest in the wind symphony has been a shaping force in its literature, and his style is reflected in young composers.

As a player, McBeth has performed in Germany, France, Italy, England, Scotland and Iceland. As a composer, he has consistently been in the top group of the most performed American symphonic wind composers the past thirty years, and as a conductor and lecturer, he travels nine months of the year and has conducted in 48 of the 50 states, Australia, Canada, Europe and Japan. 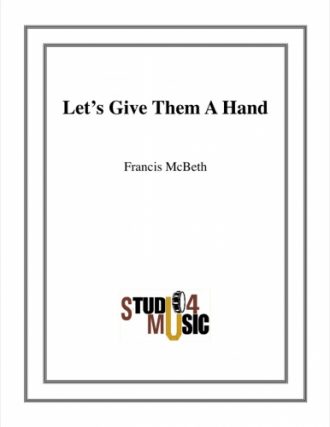 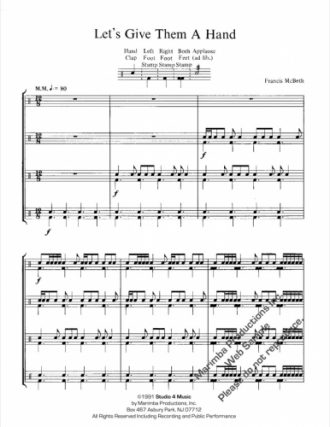 Let’s Give Them A Hand