Ginger Zyskowski has been director of Professional Drum School in Hutchinson, Kansas, for more than 25 years. The Drum School has a roster of 80+ students ranging in age from seven through adult and from a radius of 150 miles covering the central Kansas area. Ginger has been pit percussionist with Music Theater of Wichita for more than 15 years, and is also a member of the Wichita Symphony Orchestra and the Newton Mid-Kansas Symphony, Newton, KS. She is instructor of percussion at Hutchinson Community College, Hutchinson, KS, and instructor of percussion lessons, ensemble, and methods at Sterling College, Sterling, KS.

Her Professional Drum School Percussion Ensemble has performed for numerous events including the Kansas State Fair, The Miss Hutchinson Pageant, PAS Kansas Day of Percussion (4 years) and has been invited to perform with the Kansas State University Percussion Ensemble during the 2006-2007 school year. This ensemble is a group of 12 students, ages 12 - 18, and consists of students from six different school districts in the central Kansas area.

One of Zyskowski's favorite projects is Stickpeople - a production written and directed by her featuring the majority of her private students in a performance bringing 50+ students together and performing on 50+ drumsets together. The production has brought rave reviews and is a "one-of-a-kind" show. Stickpeople is a favorite production of the students as well, and serves as a great incentive for students who otherwise might not have many playing opportunities available to them. In addition, the production crew is made up of volunteer students and parents who have found this to be a great educational and fun experience. These productions have brought in as many as 1500 people, and have had sponsorship with Pro Mark, Inc, and the local Johnson Music Center store.

Currently, Zyskowski performs solo recitals, master classes, workshops, and reception music for social occasions. She is a published composer with C Alan Publications and Marimba Productions, Inc. (formerly Studio 4 Publications), and is an Educational Endorser for Pro Mark, Inc. Zyskowski served on the first Pro Mark Educational Advisory Board helping with the creation of the "Future Pro" drumstick design. Her Vibraphone/Flute duo, "Something Silver", plays for social occasions, and she is a member of the New Era Brass & Percussion Ensemble playing for Sunday morning church services. In July, 2005, she traveled to the International Percussion Symposium III at the Escuela Nacional de Musica of the University of Mexico in Mexico City where she presented marimba /vibraphone clinic and a "Percussion in the Pit" clinic with co-percussionist, Steve Hatfield, also from Wichita, Kansas. During 2004 she was a touring performer with Academic Entertainment, Inc. performing "Drums Around the World" for school assemblies in 8 states in the Midwest. She has served on the Percussive Arts Society International Convention Keyboard Panel, Education Panel, and Adjudication Panel for PASIC Composition Contest. She has performed a "Vibraphone Fundamentals" clinic for the PAS Kansas Day of Percussion at University of Kansas, April - 2006, and will be a guest artist at the University of Arizona in Tucson in November of 2006. There she will perform with a former percussion student on his graduate recital and also present a session for the music students on the topic of "The Private Studio - How to Make it Work." She has produced a book about her teaching methods and philosophies titled "GZ's MO" or "Ginger Z's Modus Operandi."

Zyskowski has performed with Ella Fitzgerald, Rich Little, Jack Benny, The Mills Brothers, Milt Jackson, Placido Domingo, Luciano Pavarotti, Art Garfunkle and the National Touring Company of Jesus Christ Superstar - 25th Anniversary Tour. She has performed in Europe, Canada, and extensively in the United States. She has also performed as principal percussionist with the Spokane Symphony and Chamber orchestras, Toledo Symphony, Seattle Opera Orchestra, and has served on the faculty at National Music Camp (Interlochen Center for the Arts).

Zyskowski is a graduate of The University of Michigan with a B.M. and M.M. in music education having studied with James Salmon and playing in the Symphony Band under the direction of Dr. Wm. D. Revelli. Previous education includes graduation from The Interlochen Arts Academy, Interlochen, Michigan where she studied with Jack McKenzie.

View cart “Carol of The Bells (Leontovich/arr. Ginger Zyskowski)” has been added to your cart. 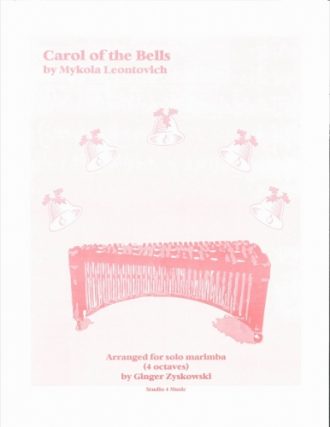 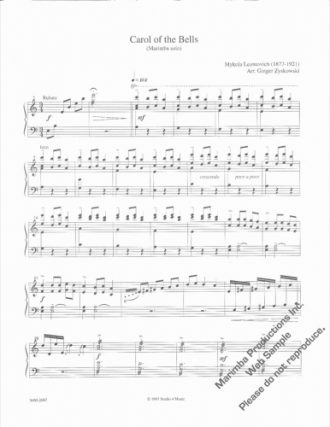