Polish marimbist, percussionist and composer Tomasz Goli?ski (b. 1986) is currently studying Postgraduate marimba solo program with Professor Ludwig Albert and composition with Professor Luc Van Hove at the Leuven University College of Arts - Lemmensinstitute, Belgium. He completed his Bachelor of Music and Master of Music (marimba specialization) with greatest distinction at the Royal Conservatoire Antwerp, Belgium in 2011 with Professor Ludwig Albert. In 2011 he also completed his Master of Arts (percussion specialization) with greatest distinction at the Academy of Music Gdansk, Poland with Professor Miros?aw Adrjanczyk. He has won many prizes including first prize of the Universal Marimba Competition 2011 in the chamber music category with his marimba duo partner Irena Manolova as Lucid Duo, first prize of the Universal Marimba Composition Competition 2011 and 2012 with the pieces for marimba solo Luminosity and Purity, second prize in the marimba category of the 8th Percussive Arts Society Italy International Percussion Competition, Fermo in 2010, second prize in the marimba solo category of the 39th Percussive Arts Society Percussion Composition Contest 2011 in the USA with the piece The Absurd World. He also got an award from the President of Koszalin in 2012 for his outstanding artistic achievements. He has participated in several courses including the Ludwig Albert International Marimba Academy Belgium 2009 and 2011, the Katarzyna Mycka's International Marimba Academy Poland 2005 , the Percussion Days Royal Conservatoire Antwerp 2010, the International Festival the Percussion Solo and in a Band Poland 1999, 2001, 2002, 2004, the Composition Workshops with Professor Marek Jasi?ski 2004, the Percussion Symposium Contemporary Times and New Trends in Teaching Percussion Bydgoszcz Music Academy Poland 2004. His piece Luminosity has been selected as a set-piece in the marimba solo category and Purity II as a repertoire piece in the marimba duo category of the Universal Marimba Competition Festival 2013 in Belgium. As a performer, Tomasz is currently working with Irena Manolova as Lucid Duo. They are preparing their first CD album, Purity, (release 2013) which will be presented at several concerts and significant international festivals such as: the International Percussion Ensemble Week 2013 Bjelovar Croatia, the Universal Marimba Festival 2013 Sint-Truiden Belgium etc... In addition he performed several times as a soloist and with ensembles in Poland, Belgium, Norway, Italy, Czech Republic, France and Germany. 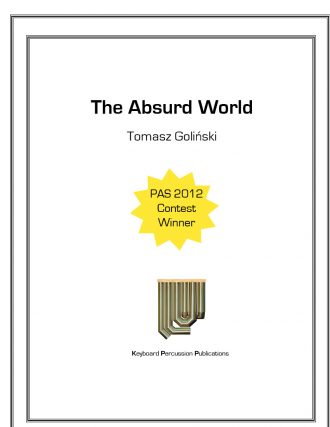 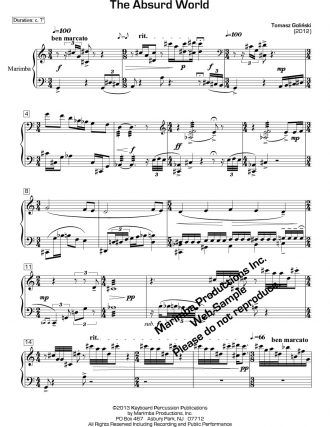 The prize winner in the 2012 PAS Composition Contest for marimba solo. This piece presents many musical qualities and technical challenges which can be very interesting for both performer and audience.

The prize winner in the 2012 PAS Composition Contest for marimba solo. This piece presents many musical qualities and technical challenges which can be very interesting for both performer and audience.