Edmund Cionek is a New York-based composer who writes for the theatre and the concert hall. His catalogue of orchestral, chamber, and vocal music reflects a keen interest in both classical and pop elements mixed in a post-modern style. A student of William Bolcom, he earned the degree DMA in Composition from the University of Michigan. Cionek also studied in Paris with famed Schoenberg disciple Max Deutsch at the Ecole Normale de Musique. He has served on the Board of Directors of the League of Composers-ISCM and the New York Art Ensemble. Carlin America, MMB, & EDITIONS Amsterdam publish his works. He is a member of ASCAP, NARAS, AFM-Local 802, and the AMC.

Cionek has been Composer-in-Residence with the Bar Harbor (ME) Music Festival for the past ten years. Many of his works have been commissioned and premiered by that organization including Spirit of the Lake, Concerto for Oboe and String Orchestra, Whale-Tronica (sax quartet and electronics), Serenade for String Orchestra, and At The Art Gallery, Part II (Water Music) for percussion and piano. He also curates the Festival's "New Composers Concert". In New York, his music has been performed by The League-ISCM Chamber Players, North-South Consonance, Composers Concordance, The New Jersey Percussion Ensemble, and the New York Art Ensemble.

New York's downtown community has recognized Cionek's theatre works for their freshness and originality. In 2004, he was a resident artist with Mabou Mines where his new multimedia work, Attack of the 50 ft. Walt Whitman, was developed and premiered. TRI-SCI-FI: A Chillogy was a finalist in the 2003 Richard Rodgers Theatre Awards. It was produced at both the Flea Theatre and the 2003 New York International Fringe Festival. Strad Magazine called it "Screamingly Funny". The Village Voice called it "authentically bizarre". He co-wrote the 70's musical revue Streakin' that ran Off-Broadway in 2002. Other recent performances include a brass fanfare for the Bar Harbor Music Festival's 40th Anniversary and a choral work for the award-winning New York-based a cappella group, The Accidentals, premiered at Joe's Pub. Current commissions include First Symphony for the Western Piedmont Symphony in February 2008. He is also at work with composer Patti Wyss on a new multimedia piece melding songs of Franz Schubert and the legend of a notorious Japanese movie monster.

Other performances of Cionek's music have included the Kimmel Center in Philadelphia, Makor in New York, the Cathedral of St. John the Divine, and Summerfest in Connecticut. His orchestrations and arrangements are performed throughout the United States. His recordings include Ed Wood: The Sinister Urge on The Accidentals, Sharpflat Records, Dream-Land and Missa Brevis on New York Art Ensemble CD64139, Mis Flores Negras on Musicians Showcase MS1077, Jazz Fantasia and Earth and Man on Poetry, Sharpflat Records and Poem for a Dog, on Little Noise Records. Cionek teaches at New York University and Purchase College. 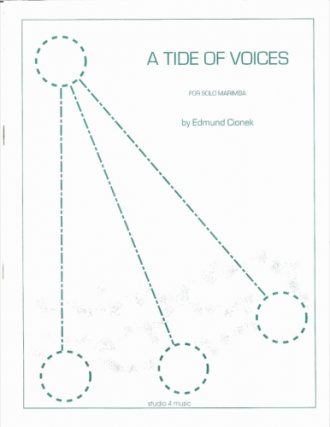 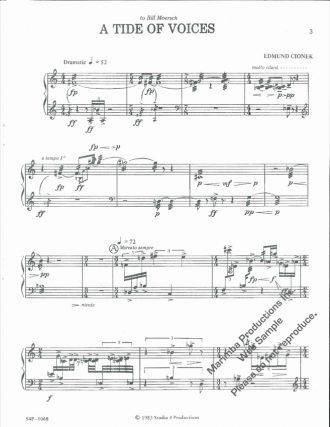 Tide of Voices, A