Lansing McLoskey (b.1964) came to the world of composition via a somewhat unorthodox route. The proverbial "Three B's" for him were not Bach, Beethoven and Brahms, but rather The Beatles, Bauhaus and Black Flag. His first experiences at writing music were not exercises in counterpoint, but as the guitarist and songwriter for punk rock bands in San Francisco in the early 1980's. It was actually through these years in the visceral world of punk that he first developed a love for classical music (but that's another story). Described as "a major talent and a deep thinker with a great ear" by the American Composers Orchestra, "an engaging, gifted composer writing smart, compelling and fascinating music...with a bluesy edge and infectious punch" by Gramophone Magazine, and "a unique musical voice which is clear and distinctive" by the American Academy of Arts and Letters, Lansing McLoskey has had his music performed to critical acclaim across the U.S. and in nineteen other countries on six continents. His music has an emotional intensity that appeals to academic and amateur alike, defying traditional stylistic pigeonholes. He has won more than two dozen national and international awards, including the prestigious Goddard Lieberson Fellowship from the American Academy of Arts and Letters, awarded to a "composer of exceptional gifts," the 2018 Aaron Copland House Award and commission, The 2016 American Prize in Composition, and the 2016 Robert Avalon International Competition for Composers. In 2009 he became the only composer in the 53 year history of the ISU Contemporary Music Festival to win both the orchestral and chamber music competitions, both blind-juried national competitions with two independent juries. Among his other awards are the Omaha Symphony International New Music Competition, the Kenneth Davenport National Competition for Orchestral Works, Charles Ives Center Orchestral Composition Competition, the Paris New Music Review International Composition Competition, Lee Ettelson Composers Award, the International Music Prize for Excellence in Composition, the International Joint Wind Quintet Project Commission Competition, Grand Prize in the Chatham Baroque Composition Competition, an Aaron Copland Recording Grant, the Charles Ives Scholarship from the American Academy of Arts and Letters, an Astral Career Grant from the National Foundation for Advancement in the Arts, and two residencies at the MacDowell Colony. McLoskey spent 20+ years as an early music singer/conductor, and has a special interest in composing for voice. He has written for some of the preeminent vocal ensembles in the world, including The Crossing, Cincinnati Vocal Arts, ensemberlino vocale (Berlin), Liber unUsualis, Tapestry, NOTUS, Boston Secession, and The Hilliard Ensemble. His Qumran Psalms - a choral cycle setting lost psalms from the Dead Sea Scrolls - won The 2016 American Prize for Choral Composition. McLoskey has been the Composer-in-Residence at several festivals, including the Alba Music Festival (Italy), the soundSCAPE Festival (Italy), the Piccolo Spoleto Festival, the Missouri Chamber Music Festival, the Charlotte New Music Festival, the Carolina Chamber Music Festival, the Webster University Young Composers Workshop, and will be the Composer-in-Residence at the 2017 Alba Music Festival in Italy. Among his many commissions are those from Meet The Composer, the National Endowment for the Arts, Pew Charitable Trusts, the Barlow Endowment, The Fromm Foundation, ASCAP, MATA, King's Chapel (Boston), and many others. Recent commissions include a full-length opera for Guerilla Opera (Boston) for 2019/20, and Zealot Canticles: An oratorio for tolerace; an 80-minute oratorio for The Crossing, released in 2018 on Innova Records. Other recent commissions includes works for Ensemble Berlin PianoPercussion, ensemberlino vocale (Berlin), The Silver Duo, pianist Scott Holden, oboist ToniMarie Marchioni, and the New Spectrum Foundation for renowned violinist Miranda Cuckson. Recent performances include festivals and concerts in Italy, the UK, Iceland, Cuba, Belgium, France, Berlin, Finland, Spain, Mexico, Colombia, Chicago, New York, Philadelphia, St. Louis, and Miami, among many others. He has lectured and given Masterclasses at over 30 schools and festivals, including Aspen, the Tanglewood Institute, Universität der Künste Berlin, and two dozen universities and conservatories across the United States. McLoskey completed a Ph.D. at Harvard University, and holds degrees with honors from UC Santa Barbara and the USC Thornton School of Music, with additional studies at Det Kongelige Danske Musikkonservatorium (The Royal Danish Academy of Music), the Wellesley Composers Conference, and the Advanced Masterclass at the Aspen Music School. His principal teachers were Mario Davidovsky, Stephen Hartke, Bernard Rands, and Donald Crockett. His book Twentieth Century Danish Music remains the only comprehensive research guide on the topic, and he was awarded the Haug Prize for Scandinavian Studies in recognition of his contributions to the field. McLoskey is a Professor of Composition at the University of Miami Frost School of Music. His music is released on Albany, Wergo Schallplatten, Innova, Capstone, Tantara, Equilibrium/Soundset, and Beauport Classics, and published by Theodore Presser Company, American Composers Alliance Press, Mostly Marimba, Subito Music, and Odhecaton Z Music. McLoskey is an avid cyclist, surfer, and skateboarder. 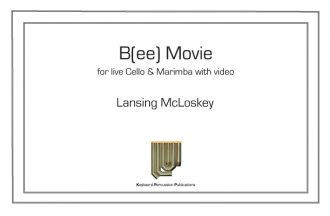 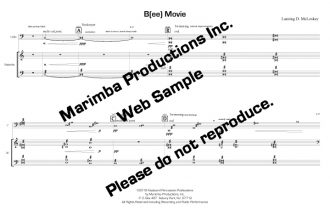 An avant-garde duet for marimba and cello, accompanying a video by Ann Steuemagel.

An avant-garde duet for marimba and cello, accompanying a video by Ann Steuemagel. 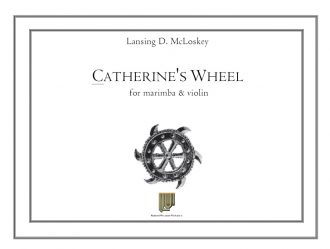 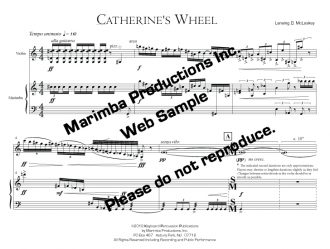 A duet for marimba and violin that pays tribute to Saint Catherine, one of the most popular saints in the Middle Ages.

A duet for marimba and violin that pays tribute to Saint Catherine, one of the most popular saints in the Middle Ages.