Nicholas Papador is currently a member of the music faculty at the University of Windsor in Ontario, Canada, where he coordinates the Percussion Studio and directs the University of Windsor Percussion Ensemble as well as teaches courses in music history, theory and education. Papador previously served as a Visiting Scholar at Cornell University where he worked in the Department of Music as well as the Department of Theatre, Film and Dance.

As a soloist, percussionist, and timpanist, Papador has performed throughout the United States, Canada, Austria, Hungary, and Sweden. He has performed/presented at two Percussive Arts Society International Conventions. As a clinician and soloist, Papador recently appeared at Queens College, Miami University-Ohio, Florida International University, Cornell University, Indiana University, University of Oregon as well as numerous high school and outreach programs. His solo recitals include standard repertoire, his own works, and pieces written expressly for him.

As a chamber musician Papador records and performs with the Marassa Duo, a groundbreaking ensemble that combines contemporary chamber percussion with Afro-Caribbean folkloric musics and jazz. Additionally, he has premiered and presented numerous works in new music festivals settings. He performed with the contemporary music group, Ensemble X during its 2004-05 season and is a founding member of both the High Street Percussion Ensemble and the Tonus Percussion Group. Other touring ensembles have included the Richard Grimes Collective (Boston) and the Lira Ensemble (Chicago). Papador has also been active in the area of commercial and world music, in numerous ensembles as a drum set artist and percussionist.

Papador completed his doctoral degree from Northwestern University and his master's degree at the world-renowned Indiana University School of Music where his efforts also earned him the university's coveted Performer's Certificate. He holds two bachelors degrees from the University of Oregon. His principal teachers have included Michael Burritt, Gerald Carlyss, James Ross, Ruben Alvarez, Charles Dowd and Paul Wertico.

Also an active composer, Papador's works have been performed by numerous chamber ensembles, percussion ensembles and soloists throughout the United States. His marimba work Autumn Portrait is now performed in recitals nationwide by collegiate marimbists and is a recommended state high school competition piece in New York, Florida, South Carolina and Idaho. 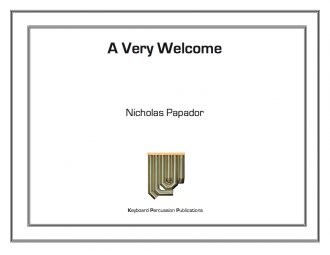 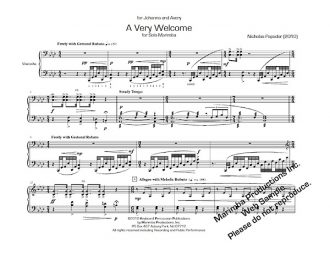 A Very Welcome is a work written in honor of my wife to celebrate the birth of our son in 2008.

A Very Welcome is a work written in honor of my wife to celebrate the birth of our son in 2008. 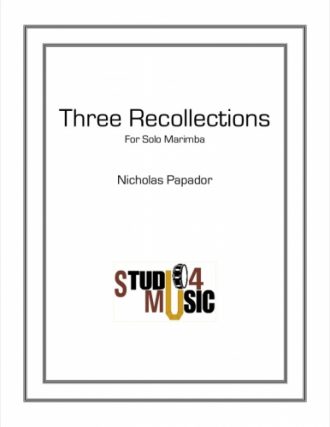 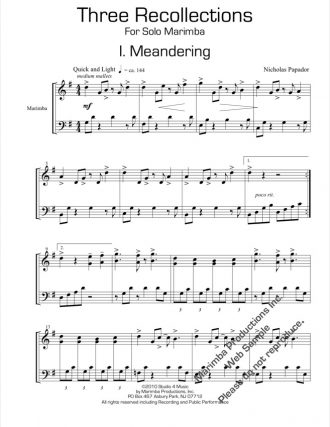