Criss-crossing the NYC/NJ area on a regular basis, Peter Saleh (b. 1977) is active as a percussionist, composer, and teacher living just about a mile west of the Statue of Liberty. His music is published by Innovative, KPP, Drop 6, Row-Loff Productions, Bachovich, and Norsk Musikforlag, and his works are regularly performed throughout the USA and internationally - including his quintet ExitIX Novum, which won second place in the 2007 Percussive Arts Society Composition Contest and in 2013 was reimagined for duo + tape by renowned electro-acoustic composer Bruce Hamilton through an international consortium of 22 distinguished performers. His original scores for percussion combine a rhythmic sophistication and harmonic fertility that stem from his diverse musical pursuits and influences while his arrangements bring great literature - from the classics to contemporary composers - into the welcoming hands of percussionists of a range of ability levels. As a composer scoring for dance, he has collaborated with several recognized choreographers and presented original work at the Ailey Citigroup Theater, The Joffrey School and the New Jersey Performing Arts Center. He has composed for The Von Howard Project and Nimbus DanceWorks, and currently accompanies modern dance classes at the Juilliard School, where some of the beginnings of his compositions first appear in the form of improvisations. Saleh also presented clinics on percussion with modern dance at the NYC 2013 PAS/KoSA "Weekend of Percussion." He is a founding member of the Exit 9 Percussion Group and in the duo Exit 9/Detour and subs regularly on drums at Avenue Q (New World Stages). Notable performances include Baryshnikov Arts Center, McCarter Theater, George Street Playhouse, NYMF, NAMT, the Princeton Festival, The Players Theatre and The Paper Mill Playhouse, as well as a solo recital tour of Taiwan and Korea. Saleh has placed his private students into some of the best music programs in the country and has guest-lectured and performed at many colleges and universities. He teaches as an adjunct instructor at the College of St. Elizabeth (Morristown, NJ), lectures on music to at SUNY Purchase's renowned Conservatory of Dance, fellowed at the University of North Texas, has served as a teaching artist for the Brooklyn Academy of Music and Young Audiences, founded and directs the Rutgers Youth Percussion Ensemble and coaches percussion with the Princeton-based Youth Orchestra of Central Jersey. Saleh is a member of BMI and AFM and has authored the pedagogic text, A Percussionist's Handbook (Bachovich) which has received industry-wide praise. He studied composition and arranging with Joseph Klein, John Mallia and Paul Rennick, and is a regional educational artist for Pearl/Adams Instruments. 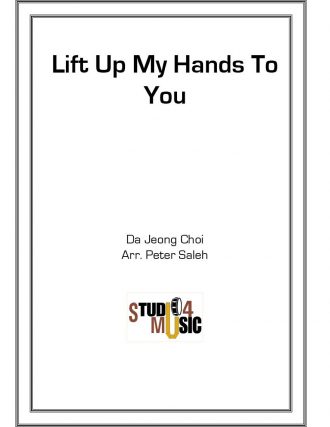 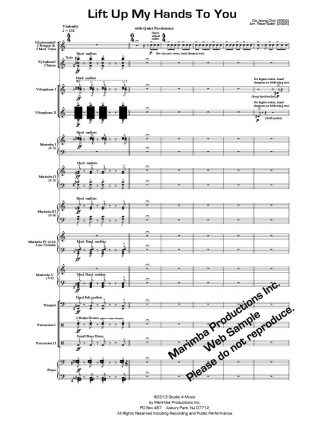 Lift Up My Hands To You (Da Jeong Choi/arr. Peter Saleh)