Rod Kosterman is currently pursuing a Masters degree in Percussion Performance from Indiana University in Bloomington. He has been a member of internationally renowned drumlines, percussion ensembles and wind ensembles, taught award winning drum corps and high school drumlines and private students, and works regularly as a soloist, recording artist, composer, arranger, and engraver. In 2008, Rod was a member of the University of North Texas Indoor Drumline under the instruction of Paul Rennick, which won the PASIC Marching Festival, and was awarded best front ensemble. He was also a member of the Pioneer Drum and Bugle Corps snare line from 2005-2008. Rod has been a member of the UNT Classical Percussion Ensemble under the direction of Mark Ford. On its tour to the Showcase Concert at the 2009 PASIC in Indianapolis, he was featured as a soloist, performing his composition for solo marimba, in nebulous suspension held, which won third prize in the PAS International Composition Contest in 2010 as a duet for marimba and cello. Rod Kosterman graduated summa cum laude from UNT, earning his Bachelor's degree in Percussion Performance and a minor in Music Theory and was awarded the honor of UNT Outstanding Undergraduate in Percussion. As a student at UNT, Rod studied with Jose Aponte, Mark Ford, Christopher Deane, Paul Rennick, Ed Smith and Ed Soph. Since beginning his studies at IU, Rod has been the recipient of the Artistic Excellence Scholarship and the Graduate Assistant position for the percussion department. Under the guidance of professors Kevin Bobo, Michael Spiro and John Tafoya, Rod's studies have ranged from major works of solo marimba, timpani, and multi-percussion literature, orchestral percussion and timpani repertoire, chamber percussion works, the folkloric music of Cuba and Brazil and percussion in the Latin Jazz Collective and IU Latin Jazz Band, especially timbales. In the summer of 2011, in addition to being an assistant teacher and arranger for the front ensemble of the Blue Knights Drum and Bugle Corps, Rod won positions as a substitute in the percussion sections of the Terre Haute Symphony Orchestra and Columbus Indiana Philharmonic. At the 2011 PASIC in Indianapolis, IN, Rod was featured as a soloist with the IU World Percussion Ensemble, which was the winner of the PAS International World Percussion Ensemble Competition earlier that same year. Rod is currently a pit tech with the Blue Knights Drum and Bugle Corps and also the Principal of Percussion for the IU Symphony Orchestra. Performances and videos of Rod can be seen at http://www.youtube.com/rodkosterman. 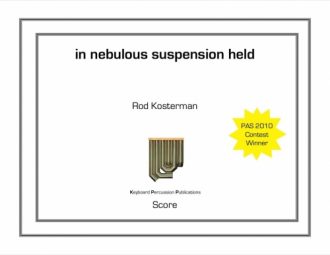 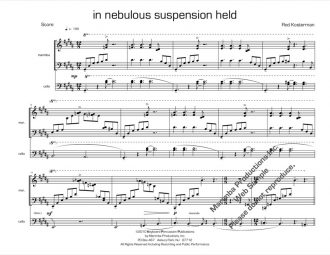 A third-place winner in the 2010 PAS composition contest for marimba/cello duo. Marimba and Cello Duet or Unaccompanied Marimba

A third-place winner in the 2010 PAS composition contest for marimba/cello duo. Marimba and Cello Duet or Unaccompanied Marimba