Samuel Adler was born March 4, 1928 in Mannheim, Germany; came to the United States in 1939. Inducted into the American Academy of Arts and Letters in May 2001, he is the composer of over 400 published works that have been performed all over the world. He has also contributed numerous articles to major magazines and books published in the US and abroad.

Adler is Professor-emeritus at the Eastman School of Music where he taught from 1966 to 1995 and served as chair of the composition department from 1974 until his retirement. Before going to Eastman, Adler served as professor of composition at the University of North Texas (1957-1977), Music Director at Temple Emanu-El in Dallas, TX (1953-1966), and Instructor of Fine Arts at the Hokaday School in Dallas, TX (1955-66). From 1954 to 1958, he was music director of the Dallas Lyric Theater, and the Dallas Chorale. Since 1997, he has been a member of the composition faculty at the Julliard School of Music in New York City. Adler has given master classes and workshops at over 300 Universities worldwide, and in the summers has taught at major music festivals such as Tanglewood, Aspen, Brevard, Bowdin, as well as others in France, Germany, Israel, Spain, Austria, Poland, South America, and Korea.

Adler has been awarded many prizes including a 1990 award from the American Academy of Arts and Letters, the Charles Ives Award, the Lillian Fairchild Award, the MTNA award for Composer of the Year Special Citation by the American Federation of Music Clubs. In 1983, he won the Deems Taylor Award for his book The Study of Orchestra. In 1988-89, he was designated "Phi Beta Kappa Scholar, in 1989 he received the Eastman School's Eisenhard Award for distinguished teaching, in 1991 he was honored being named the Composer of the Year by the American Guild of Organists. Adler was awarded a Guggenheim Fellowship, he has been a MacDowell Fellow for five years. During his second visit to Chile, he was elected to the Chilean Academy of Fine Arts "for his outstanding contribution to the world of music as a composer. In 1990, he was elected to the Akademie der Kuenste in Germany for distinguished service to music. While serving in the United States Army, Adler founded and conducted the Seventh Army Symphony Orchestra, and because of the orchestra's great psychological and musical impact on European culture, he was awarded the Army's Medal of Honor. In May of 2003 he received the Aaron Copland Award from ASCAP for lifetime achievement. 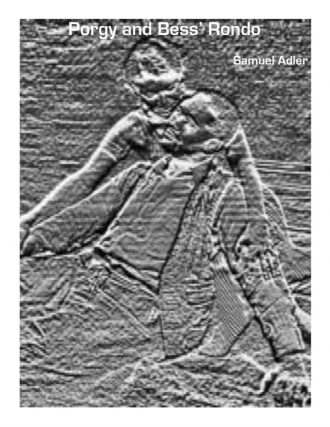 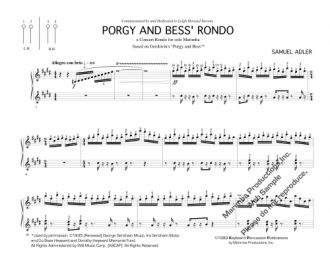 Based on music from George Gershwin’s Opera Porgy and Bess.
This work was commissioned by Leigh Howard Stevens to be a full-fledged concert work in its own right – not merely a medley of tunes from the opera.

Based on music from George Gershwin’s Opera Porgy and Bess.
This work was commissioned by Leigh Howard Stevens to be a full-fledged concert work in its own right – not merely a medley of tunes from the opera.